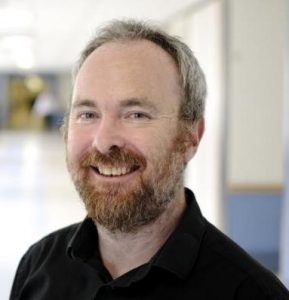 Colin Palmer has a major international reputation in relation to his research on identification of the genetic basis of human traits, complex diseases and pharmacogenetics. He has published >250 papers in major journals, including Science, Nature, Nature Genetics and the NEJM. He has an H factor of 77; his papers have been cited over 30,000 times.

He pioneered population pharmacogenetic research, with establishment of the GoDARTS cohort in Tayside 1997, now a major resource for the study of diabetes with >40,000 patients and controls; he has been able to use this to create linkage to the electronic medical records, especially national prescribing datasets. Development of these unique resources allowed him to play a key role in GWAS discovery of genes for T2D, height and obesity, including discovery of the role FTO gene in regulating eating behaviours. The pharmacogenetic value of this approach is demonstrated by a major study that identified a locus accounting for a proportion of the hypoglycaemic actions of metformin. Other studies on asthma in children have provided novel pharmacogenetic discoveries, including collaboration with Professor Irwin Mclean and identification of the Fillaggrin gene as a determinant of eczema and asthma.

His recent research focusses on the discovery of genes that modulate drug response and adverse drug reactions for commonly used drugs such as Statins and ACE inhibitors.

He is Director of The Scottish Health Research Register (SHARE) which aims to involve the entire Scottish population in health research.  Nearly 200,000 people have currently registered as volunteers with SHARE.  In addition, he leads the NIHR Unit for Global Diabetes Outcomes Research, a partnership between India and Scotland which studies over 600,000 people in order to provide precision medicine in type 2 diabetes.